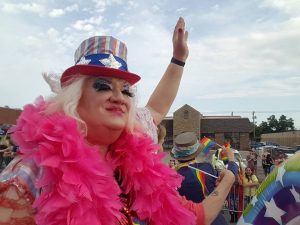 We are honored to award our 2020 Hero of Hope award to community activist Victor Gorin.

Cathedral of Hope presents the Hero of Hope award to Victor Gorin to reflect the community’s gratitude for his service as an activist seeking justice and equality for the LGBTQ community, which embodies the church’s founding principles of “Extravagant Grace, Radical Inclusion, and Relentless Compassion.” His work and accomplishments serve as a beacon of hope to a community that regularly endures injustice brought on by prejudice and intolerance.

The founding mission of the Cathedral of Hope is to reclaim Christianity as a faith of extravagant grace, radical inclusion, and relentless compassion. As such, we seek ways to honor those who embody and live out this mission through lives that are transforming our society at every level. The Hero of Hope is someone who works to:

The Hero of Hope Award originated in the early 1990s as a way for the Cathedral of Hope to single out and honor people who have courageously taken a stand for LGBTQ rights. The Hero of Hope Award is presented in recognition of those who have taken courageous stands for the rights of all people without regard to gender, race, sexual orientation, gender identity, or gender expression.

We honor our previous Hero of Hope winners who have made a lasting impact for justice and peace in our community.