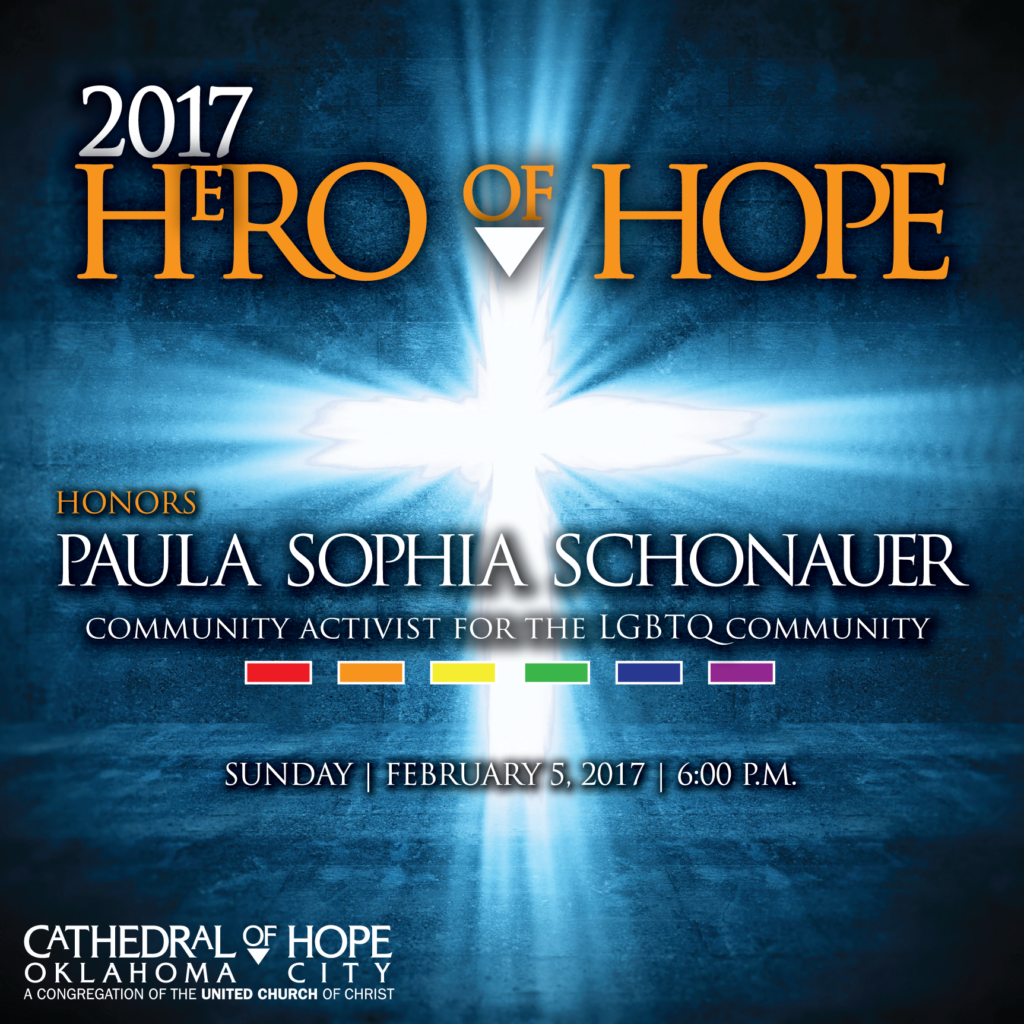 Cathedral of Hope Oklahoma City is pleased to announce that Paula Sophia Schonauer will be honored as our Hero of Hope during our evening service on February 5, 2017, at 6:00 p.m. The Hero of Hope Award is given to someone who works to change how the world thinks about LGBTQ people, to change how LGBTQ people think about God, to reach marginalized people, and to redefine Christianity as an including faith rather than an excluding religion.

Paula Sophia Schonauer is a twenty year veteran with the Oklahoma City Police Department and was the agency’s first openly transgender officer. She earned an MFA in Creative Writing at the University of Central Oklahoma in 2011. Her published works include the short story “Hystericus” with Etopia Press and her first novel “Shadowboxer,” which explores closeted identities, the consequences of bullying, and the explosive release of a suppressed personal truth. Paula has been an Adjunct Professor at Rose State College and Oklahoma City Community College, a columnist with The Gayly regional newspaper, a contributor to Our Big Gayborhood, and a slam poet competing on the national stage at the National Poetry Slam. Paula ran for office to be a state representative in the Oklahoma Legislature in 2014 and continues to use her voice to stand up for those ostracized in our society. As an ordained minister, she recently shared her gifts of word and spirituality as a guest preacher at both Cathedral of Hope and Church of the Open Arms. Paula is currently finishing up her Masters of Social Work degree at the University of Oklahoma, and will be graduating in May.

Cathedral of Hope presents the Hero of Hope award to Paula Sophia Schonauer to reflect the community’s gratitude for her service as an activist seeking justice and equality for the LGBTQ community, which embodies our founding principals of “Extravagant Grace, Radical Inclusion, and Relentless Compassion.” Her work and accomplishments serve as a beacon of hope to a community that regularly endures injustice brought on by prejudice and intolerance.

All are invited to attend this service at Cathedral of Hope on Sunday, February 5, 2017, at 6:00 p.m., in the sanctuary of Church of the Open Arms, 3131 N. Pennsylvania Ave., Oklahoma City, and to attend the reception to follow.

You can find out more about the the Hero of Hope at cohokc.com/hero.