What an honour to chair the planning committtee for last night’s LGBT Pride Interfaith Service of Remembrance, which was a beautiful, moving event.

The program personalities covered a wide range of Christian denominations, Judaism, Hinduism, Buddhism, and Unitarianism.  And each prayer or reflection was a beautiful statement from their respective tradition. 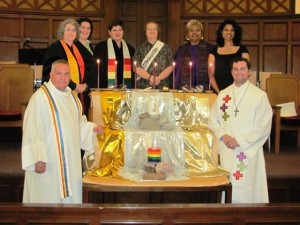 After prelude, welcome, and congregational singing of “We Would Be One,” Jonalu Johnstone, of the First Unitarian Church, set the stage with an insightful reflection on Loss and Remembrance that explained the significance of what we were doing in the service.

Then we lit seven candles each remembering the lives of some group of people, and prayers were offered for each.

Rev. Dr. Henry Roberson, retired priest, prayed for Activists and Community Leaders.  His was a powerful prayer thanking God for sending us prophets who make the world a better place.

Rev. Kris Ladusau, of the Dharma Center, reflected on Victims of Hate Crimes by sharing a story of a friend who was beaten, and then his simple, profound prayer for who each of should live as creators of peace.

The prayer of the Rev. Loyce Newton Edwards, a retired UCC minister, drew from the African-American tradition with its rhythm and energy and evocative words (“bodacious” being everyone’s favourite) and she remembered her transsexual sister and prayed for victims of HIV and AIDS.

Roshini Nambiar, the spiritual leader of the Vedic Temple, offered a traditional Sanskrit prayer for Friends and Loved Ones.  The beautiful, unfamiliar to many, Sanskrit lifted us to a mystical plane.

Praying for Partners and Spouses, the Rev. Dr. Kathy Mcallie of Church of the Open Arms UCC, spoke about passion and romance and its ability to call forth our best selves.

Rabbi Abby Jacobson of Emanuel Synagogue remarked on all those whom we do not get to saw our goodbyes to and offered a meditation for Goodbyes Unsaid that invited us to imagine what the funeral for that loved one should have been if we had been able to be there as our true selves and say and do what we needed to do.

Then the Rev. Scott Hamilton, Executive Director of the Cimarron Alliance Foundation, concluded this portion with a ringing commentary on the Lonely and Forgotten, calling us all to commit that no one ever again die alone.

This portion concluded with a musical reflection adapted from the Jewish practice of niggun, whereby the congregation hums a tune over and over.

Then, individual names were read, with each name followed by the chiming of a bell.  Around sixty names had been turned in.  During this portion, I heard many fighting back tears in the audience, and Kathy almost broke down when reading the names of Bill Rogers and Paul Thompson.

After a minute of silence, we were lifted up by the song “Breaths” by the quartet Evensong.  This is a Sweet Honey in the Rock song, and its accapella rhythms and skat-like sounds honoring the dead and claiming that they are always with us, filled us with joy as we began to move upward in our service.

I brought the Reflection on Light and Hope, with the poem “Recovery” by Czeslaw Milosz.

Then we passed the candle light throughout the congregation as we sang “Let There Be Peace on Earth.”  This ended with everyone’s hands raised in the air, an anthem declaring our commitment to one another and a better world.